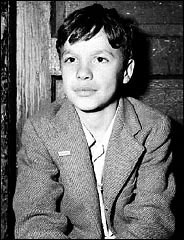 The sight of ash-adorned foreheads always increases the most powerful of Catholic emotions – guilt – in us not-so-devout Catholics.

Every year when Lent starts, we vow to get back into the good graces. It coincides with the need for something to believe in, as the season of snow and slush and grayness sets in, and the wars and layoffs and general feeling of the wheels coming off – that we’d hoped would be over by now – has dragged on for another year.

There were few footprints on the steep, snow-covered steps leading from the Grand Concourse to the Queen of the Universe Shrine.

The 10 Commandments are posted there on faded blue wooden tablets. Garlands of artificial roses – red, and ancient-looking gray ones – are strewn on a statue of the  Blessed Virgin Mary. Another statue of her is behind a glass door.

An awning over the length of the area protects against some snow blowing off the building next door. There is a worn wooden kneeler, with the words “Pray the Rosary for Peace.”

But on a November night in 1945, hundreds of candles shimmered as some 25,000 people came to this spot in hope of seeing something they believed in.

They came because a 9-year-old boy named Joseph Vitolo said he saw the Blessed Virgin hovering there.

The story made headlines across the nation to a war-weary people, and drew reporters from around the world.

Vitolo was the youngest child of a large Italian immigrant family who lived in a house a block off the Concourse. He was playing with friends behind his house when he saw a floating figure, a young woman in pink who looked like the Virgin Mary. She called to him by his name.

The lady in the vision asked him to come to the spot for 16 nights to say the rosary. She told him that she wanted the world to pray for peace.

When word spread through the neighborhood, people came to talk to him, and to see the rock above which the vision floated.

They laid flowers and brought sick and crippled loved ones. They brought pictures of men killed in the war.

TIME magazine and LIFE magazine published articles, with hints of skepticism that the Queen of the Angels would show up in the Bronx, to, of all people, a little Italian boy.

TIME called the Bronx “a drab backwash” of New York City. Meanwhile, the Grand Concourse of 1945 was the borough at its grandest.

Vitolo led the rosary every evening for the 16 days, and then continued to do it, even as the crowds diminished, for six decades.

He made the ascent from his blue house each night at 7 to what became a shrine.

He never wanted to leave the neighborhood, even while it changed drastically and all his neighbors moved away.

“I like to be near the shrine,” he said last week.

But now, Vitolo, 73, isn’t able to get up the stairs to the shrine, except for once in a while.

He had heart surgery, and tires easily.

He said he had just returned from church on Ash Wednesday, but couldn’t make it up to the shrine.

Vitolo is looking forward to May, when the weather will be nice and the annual crowning of the Blessed Mother draws a crowd.

“Quite a few people come,” he said brightly.

An elderly man came out of the house next to the shrine. He takes care of it.

He swept the snow off the steps and cautioned a visitor to be careful walking down.

Asked if anyone else had been there that day, he said no, but that a few do show up every day.

“We need a miracle, to bring back all the people,” he said, then bid farewell with “God bless.”

And it’s true. Even with the forlorn flowers and snow-covered statues, that the shrine still exists, all these years later, that people still believe in what they can’t see there, lifts the spirits.

For more on this http://www.visionsofjesuschrist.com/weeping278.htm , The Boy who saw the Virgin Mary